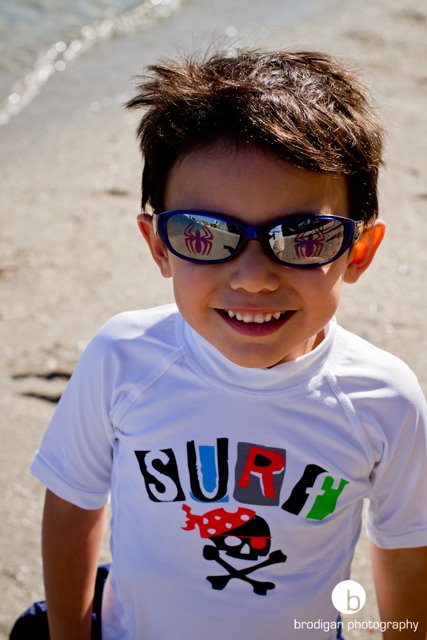 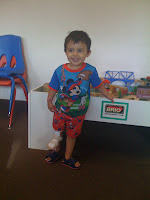 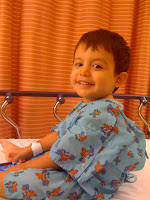 We are in pre-op waiting...it's 9:13 and we got here at 8 am. Ethan has been doing great. He has not asked for his milk once. We'll let you know when it's our turn. It was such a trooper the best kid in the pre-op everyone was wanting him as a patient. Never once cried or complained about waiting.

It's 10 tell one and we are still waiting. He had his happy juice but still going. Hopefully, it won't be much longer. It's 1:30 and he has been taken back to the operating room. Eddie walked him back he said he fought the sleeping gas but was fine when Eddie walked out. Lord please keep him safe!!! 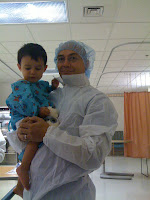 One hour down and nothing yet. Three hours down. A little anxious that's an understatement that's for sure! It's 5:30 and we are still waiting. Wished they would give us a status update!!! Eddie just went back to see if he could get an update! Hope he doesn't cause too much trouble. It's 6:00 pm, Dr. Paley just came out to tell us that the surgery went well. Hip has been secured with 6 screws, bump was removed and 2 ligaments got added to his knee. We have about another hour before we can see him. He is getting x-rays, incision closed and then casted! Praise the Lord no fixator. He will have a spica cast for 6 weeks but better than cleaning pins. He also said he didn't lose too much blood but won't know for sure if he needs a blood transfusion tell in a couple of days. It's 8 pm and they just rolled him through the waiting area. He is still out and has crazy hair! Want to see him asap! It's 9:30 and we are finally united again!!! We are so happy to be with our boy. It was a very long stressful day but it's almost over. He is doing so good. He is such a trooper! At 11 pm he started asking for his juice. He downed almost two 16oz gatorade's. He fell asleep and I noticed he looked really red. The nurse checked his temperature and it was 101 degrees. We gave him Tylenol and will check in on him within the hour. It's 1:30 am and his temperature is down to 98 degrees!

I can't even begin to tell you how stressful it was today. The sitting around waiting for someone to assure you that your baby is okay is beyond believe. Don't get me wrong I had all the faith in the world that the surgery would be a success but it's still hard not knowing any thing. The nurses today have been super sweet. Lynn is taking good care of our little guy tonight. Julie is the tech has also been super! How I pray for a better day tomorrow!

During our waiting period we had the pleasure to meet Erin. A little girl from San Fransisco who had tibia surgery. She was born with a broken tibia that started growing at a 90 degree angle (bump). They met with Dr. Paley for the first time on Tuesday and didn't waist any time scheduling her surgery. During the long wait Erin was so happy and excited about her surgery. After her happy juice she let her nurse and everyone know that she was getting dizzy! It was super cute to see a child so strong! Keep Erin and her family in your prayers!

I forgot to mention, Ethan was not phased by the blood pressure machine it's like he had been doing it for years! He just extended his arm for the nurse to take his blood pressure. It was pretty darn cute.
Posted by Ethan and Family at 6:08 AM 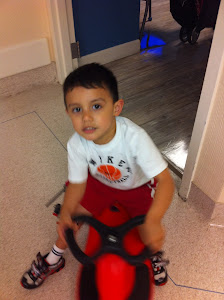 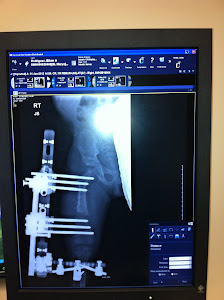 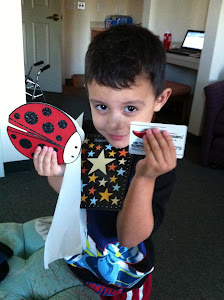 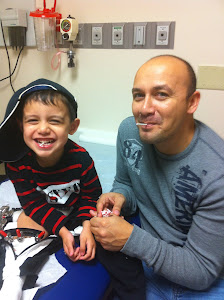 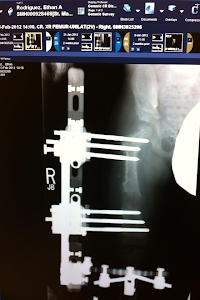 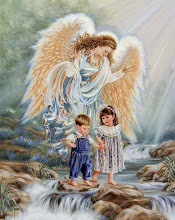